Oh, how I missed this amazing place without realising it!


Once I decided, rather on a whim, to go and see works in the museum I had not visited in so many years but for which I held very positive memories thanks to my last foray all those years ago.


Aside from unexpectedly setting the alarm off twice (first apparently for staring too closely at the back of a Tinguely installation – it’s a white painted disaggregated metal sculpture fixed to the wall with the complex mechanism behind it unplugged - yet visible if you looked) and then another time on the second floor when I touched a flyer that I thought was for public consideration. The museum security sauntered in to see who had dared cause this disquiet. I pretended not to have anything to do with it. A truly bewildering experience if you ask me.


As I wandered the halls and rooms of the ground floor, I started to wonder what exactly I had liked so much about this place. Well, I soon discovered what it was about this place that made it worth visiting again and again.

I started off with the works by Stoecklin who had a special exhibition – like a mini- retrospective – of his works on display. The whole thing was explained in German so of course I cannot offer a descriptive of what the exhibition was about or why it was being held now.


Upon reflection, I don’t think a museum is the place artists go to die – this being a quote made famous by an artist whose name escapes me.


I think it is a place where they go to be reborn, their genius remembered, visible up close and personal. Looking at the work of most of these artists is like living and breathing the same air as them, even for a fraction of a second. It is as though you are with them from the conception of their artwork to the final brushstroke, following them as would their assistant, their shadow. You can feel their energy, their almost palpable push or patient musing over the canvas, as though you are invited into their atelier to ponder with them every single thrust and quibble of the brush or palette knife.


Paul Klee: I discovered more works by this artist I would normally ignore. Ignore is probably harsh. I have however been known not to linger over his work, rather walking past without stopping. Not this time though. I found myself pausing, studying for an inordinately long time his abstract painting – the one with hundreds of tiny dots over fragmented squares and triangles.


His canvases, I realise, have more depth and a careful thought than I ever before gave them credit for. This is evident in the formulation of his pieces. It makes me want to visit his museum in Berne.
-         http://www.zpk.org/en/index.html


Niklaus Stoecklin’s “Das Wilde Madchen” was a pleasant surprise. The bright blue background and the odd, rather savage female figure is an unorthodox choice. He’s the first artist I have ever seen who has been able to convey layers of depth in his foreground - be it matt or glossy. He knew how to create luminous texture in his paintings seemingly without trying. His layering is complex and the paintings never look flat. It is not surprising to discover he learnt modern graphic style of art in Munich and was very interested in posters.


Born to Swiss parents, Stoecklin hailed from Basel and trained as an artist from a young age. He earned a living designing posters. He died in 1982. 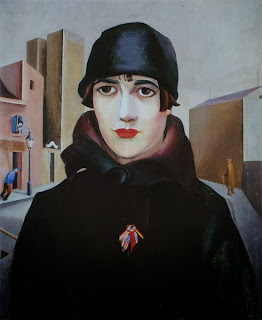 Hodler: one of my all-time favourite artists!! It was good to see his self-portrait in which it looks like he’s a man who did not take himself too seriously when he didn’t have to. His are paintings filled with matt colours which never look flat or dull. I of course marvelled at the detailing in his work, the final defining dark brush marks which turn the painting into something that is almost an illustration drawing. Bravo Hodler, bravo!

Picasso’s The Two brothers - 1906 – the pink large nude. One of the boys is on the cusp of adolescence while the other will not be a toddler for much longer - is an affectionate and kind piece, not least because of the choice of dusky rose as the predominant colour.


The “Seated Harlequin (Portrait of Painter Jacinto Salvado) 1923” is beautiful – of course it is one of Picasso’s best works. It is gentle, mature, sophisticated and achieved with soft pastel colours, without jarring with the outlined detailing. All this was achieved using a tempura on canvas technique. 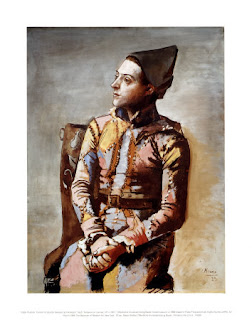 Holbein: I didn’t realise there was a Hans Holbein the Elder (Portrait of Jorg Fischer’s Wife at the age of 34) and a Hans Holbein the Younger (Lais of Corinth and Adam and Eve). Both are amazing artists in their own particular style and disposition. Though they do manage to reflect a certain over-seriousness in their subjects. You can tell portraiture was taken very, very seriously back then.

Bocklin’s Naiads at Play – 1886 is interesting. Aside from the size (151 x 176.5 cm) and depth of detail, it is all the more amazing because it is tempura on canvas. Just think of the hours spent mixing the egg yolk in with the pigment, painting, redefining and painting again.


I did not see the Piet Mondrian or the Ed Ruscha exhibitions and I don’t regret it as there was so much to see on the other floors and I am not a particularly ardent fan of either of those two.


Another surprise for me was the Soutine pieces on the second floor. The dead-carcass-skin-artist showed he had other styles and (shock!) was classically trained.

I thoroughly enjoyed Van Gogh’s cityscape View of Paris seen from Montmarte – 1886 as well as other landscape paintings in the same room though their names and painters escape me right now – one was of a view of a village painted in bold horizontal strokes of bright primary colours – Meuniers? Should have taken notes.

Segantini was a delight as ever though they only had one of his paintings; At the watering place – 1888. It has this outdoorsy, almost folkloric style and is of course filled with cows, grass and farm life euphoria. The painting is not the one I saw but it gives some idea of his style of art. 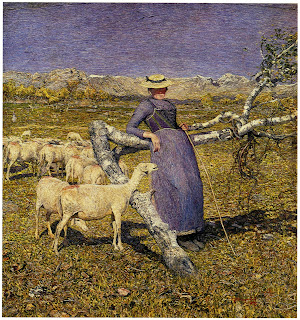 Giovanni Segantini is a Swiss artist whose brushstrokes are unlike any other artists, thin, sharp and deliberate. They convey vibrancy, life and lush depth seemingly without much effort. His paintings – at least the ones I have seen, are never flat or boring.


Apparently, he has a museum dedicated to his works in St. Moritz. I would love to visit but St. Moritz is far and won’t be going yonder to ski so…

In any case, the Kunstmuseum Basel is a hallowed repository for great international artists. Their works seem to vibrate off their wall with energy and a synergy unlike anywhere else. Here the examples of the big names sit side by side as though in a permanent conversation with each other. From Miro, Gaugin, Kandinsky and Leger to Picasso, Monet, Degas and Manet, to Jasper Johns and Dali, there is something on each floor that is bound to delight the soul. I am so glad I came.

Posted by African Creative Spirit at 2:58 AM No comments:

African Creative Spirit
Artist, Writer and Intrepid Traveller interested in political and social activism. Our cultural richness unifies that which seeks to seperate. Let us celebrate it more.